Sue Jorgensen as a first grader

The Sue Jorgensen Library Foundation was created in 1996 to benefit libraries and advance the cause of childhood literacy in Wyoming. After making a significant contribution of books to the library of her children’s elementary school, the foundation learned of a community that held an annual drive to raise enough money to give every first grade child a book to encourage early enthusiasm for reading. With the support of local teachers, administrators, and parents, the “Casper Cares, Casper Reads” project was born.

A steering committee of teachers, librarians, school administrators and parents was formed in January 1999. Six hardback books of varying reading levels were selected to be distributed to each first grade classroom in the school district. Each student then had the opportunity to select the book of their choice. Orders were compiled and placed through an independent local bookstore. In June 1999, all of the Natrona County School District first graders gathered on the campus of Casper College for the very first CC/CR festival. One of the many exciting aspects of this program is that it benefits all children -from great readers to those who are just “breaking the code,” from those with veritable libraries of their own to those without a single book in their home. 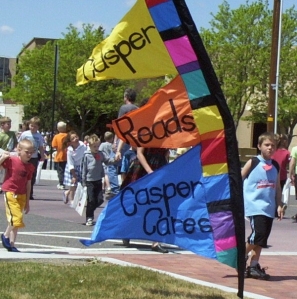 In 2006, the Casper Cares, Casper Reads program was taken to a new level, expanding statewide for the first time as “Wyoming Reads.” The program has since grown to include celebrations in all of Wyoming’s 23 counties, distributing books to nearly 7,500 first graders in 2019. Each year since 2006, the Governor has issued a proclamation declaring Wyoming Literacy Day to fall in conjunction with this valuable statewide celebration.

John Jorgensen leads this group of extraordinary educators and civic leaders. John established the Sue Jorgensen Library Foundation and the “Casper Cares, Casper Reads” celebration to honor his late wife’s commitment to literacy and books. “She was always very dedicated to children and to literacy,” says John. “She believed that until someone can read, they can’t really do anything else.” This is the vision fueling this important community enterprise.

One thought on “History”